European Geosciences Union (EGU) annually holds a massive conference with more than 15 000 scientists attending from around the globe. Unfortunately, due to the COVID-19 outbreak, this year most scientific conferences were cancelled or postponed, and the EGU annual meeting activities were arranged online (EGU2020 – Sharing Geoscience Online). The WDRG had altogether six presentations in the meeting. In this blog post, we briefly present some of our topics presented at the EGU meeting of 2020 and our experience of the conference.

Johannes – where should the animals graze?

After I heard the physical EGU was cancelled, my assumptions of the offering of the conference sank into bottom mud. I had already created a poster and practiced for the presentation and all I got was the display presentation. However, when the EGU week started, I realized the conference is not a total joke after all. Display/chat sessions worked well at least for the presenters who had planned some questions beforehand and the threshold to ask anything was extremely low.

Finally, I presented my first PhD article “Livestock carrying capacity: assessment of the world`s grasslands based on MODIS data products” (can be found here) in a session with around 40 participants. The discussion was lively, I got useful comments and after the session, I even received an email, where a Dr. ask whether I am interested to cooperate! So, after all the conference appeared to be pretty time-efficient way to receive feedback and get contacts without needing to travel to Vienna for a week! On the other hand, due to COVID-19 and the remote conference, I completely missed the Vienna Philharmonic Orchestra…

I had originally a poster in a drought session. I was planning to cancel the whole thing, since the live text chat session, where my poster had been moved to, did not sound worth the trouble. But in the end, we did an extended abstract for the session. We got many good questions in the session, even from esteemed drought experts. So, in hindsight, the experience was good and worth the effort!

I did not really follow other sessions during the week and there was really no networking or finding of new ideas. I really hope after the corona we get back to more “normal” concept. However, on the other hand this really showed the potential of remote conferences. I believe a large proportion of conferences could be arranged like this, and maybe cut the physical traveling to minimum.

Our extended abstract about “quantifying the co-occurrence of hydrological, meteorological and agricultural droughts on a global scale”, can be found here. 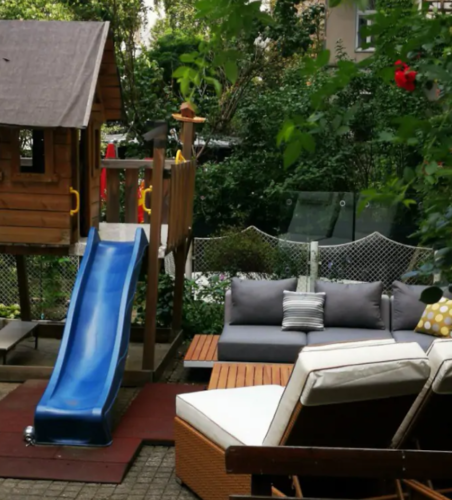 Picture from the AirBnB-crib we had booked for the whole group.

For me, it was a good experience to attend the EGU meeting this year, although, it doesn’t even nearly have the same feeling as traveling on premise and spending a week listening to presentations and discussing with fellow scientists. Usually one will easily attend tens of sessions during the conference, but this year I attended only a few sessions outside the one I presented in.

My own session was a text-based chat, which worked better than expected, as the threshold to ask questions was perhaps slightly lower than normal. My presentation titled ‘The relationship between extreme weather and low crop yields’ can be found here. Hopefully, next year we’ll be able to travel to Vienna and experience the EGU magic on site.

Amy – Resilience for whom?

Like the others, I was quite disappointed to not have a road trip to Vienna for this conference, though their ability to hold it all online definitely raises some important questions around how often we researchers really need to travel for events like this – and how much we can reduce our carbon emissions by doing more online. It was a little overwhelming to navigate all the sessions and I missed the networking opportunities, but my session at least went smoothly (‘Climate Extremes, Tipping Dynamics, and Earth Resilience in the Anthropocene’).

I was originally meant to have an oral presentation, and since my session also included a Zoom call (at one point, with over 200 people), I was still able to share my slides and talk a bit. I gave a short presentation titled: “Resilience for whom? Governing social-ecological transformation in Cambodia’s Tonle Sap Lake”. I showed a framework we have been developing to study resilience and governance in dynamic social-ecological systems, with some brief analysis of the Tonle Sap Lake. This topic is particularly relevant in regions such as the Mekong, where pressures such as climate change, hydropower and changing demographics are mounting. Our aim with this study is to look at resilience critically and incorporate social dimensions more fully (such as politics, power and agency). I had some positive feedback from others in the session, and overall enjoyed the experience (though I would have preferred to be with the team in Vienna)! 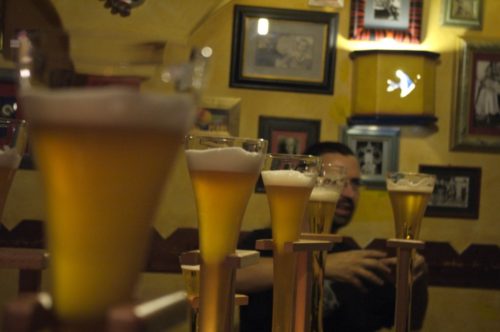 Some Austrian beers, that we planned on drinking

As an initial venture into the world of virtual conferencing, I think the EGU ‘Sharing Geoscience Online’ made a lot of progress, and laid groundwork that will be adapted in the future to enhance traditional style conferences. However, despite some innovative solutions to difficult circumstances, this year’s EGU fell a long way short of my previous experiences, and not just for the lack of Austrian beer.

Attending the EGU conference has always brought new discoveries, unexpected highlights, chance meetings, and lively debate about subjects I had never even considered before. But that wasn’t possible with this new format, as it required any participant to have pre-examined the content of presentations before discussions, which limited the scope of my involvement to a few topics I’m currently working on. I felt that this was the case for most people who took part in these text-based chat sessions, where each of the 60 or so members who were present dutifully waited their turn to ask a question of the one presentation they were interested in, before once again remaining mute.

When presenting our work in the session entitled ‘Forest and tropical hydrology’ (which can still be found here), I received a couple of insightful questions that were useful to think about, but most questions were rather simple, and I felt they were asked mostly out of politeness to fill the growing online silence.

Overall, I think the legacy of this online experiment will be more valuable in the long term than the benefits derived from this year’s conference.

As with likely everyone who has planned to attend EGU, I felt very disappointed for the cancellation of physical meeting and having the activities online only. The text-based chat sessions gave me some flashbacks to early 2000’s chats and I had high expectations.

When the conference finally started, I attended some interesting sessions which were arranged, but I felt that they were not really working. There was too short time for each display (just a few minutes in some of the busiest sessions), and it was clearly important to have looked at the display materials beforehand. This requires a completely different approach to attending a conference. In the physical EGU, you could just pop in an interesting session without preparing ahead and enjoy the presentations. Perhaps analogous to the chat sessions in a physical context would be a poster session, where the author is present only a few minutes, and you move from poster to poster in a huge group.

That said, my own presentation session was on Friday, and by that time the conveners had already amassed enough experience with the chats that the sessions were much better arranged. In my session, displays were brought in the conversation in groups, and thus the time per group was enough to glance through the more interesting displays. The discussion was livelier as well, since the attendees had more time for ad-hoc questions (as opposed to questions prepared ahead of the session).

All in all, I would rate the first all-online EGU at 4/5, considering the highly experimental nature of this year’s event. Would do it again.

To sum up, we think that EGU made a nice effort bringing the EGU on-line and brought a possibility to share and interact virtually in this socially distancing time. They also managed to do it in impressively short time. The live chat sessions were ok and provided a platform for discussion. However, a zoom-type of presentation with slides was seen as much better. It also provided more of the human interaction lost to the lockdowns.

We all think that there is huge potential in arranging more academic interaction and networking online, but we definitely also need physical events with traveling. So hopefully we see EGU back on more traditional format next year.